END_OF_DOCUMENT_TOKEN_TO_BE_REPLACED

This article was originally featured in the March 2020 issue of Broadcast Engineering Extra.

Here at the Northwest Independent School District in northern Texas, we’re very proud to play host to something that’s quite unique in high school education: a functioning television studio and station, operated completely by students. Based at Northwest High School in suburban Fort Worth, station NHSTV is part of our Creative Media Production (CMP) academy, giving students an immersive experience and complete introduction to the world of professional broadcasting.

As a groundbreaking student-run TV channel, NHSTV has been named the top live daily show in the U.S. Southwest by the Student Television Network for four years running. Also – this just in – the station has been nominated for the Best High School Newscast from the Lone Star Chapter of the National Academy of Television Arts and Sciences (the Texas Emmys).

Our school district is one of the largest and fastest-growing in Texas, operating 27 schools over a 250-square-mile area in northern Texas and serving almost 20,000 students. The CMP academy is one of eight such programs running at our four high schools, each one designed to give students a deep dive into disciplines they’re considering for their professional careers. In its 10th year, CMP focuses on television broadcast, filmmaking, graphic design and illustration, and commercial photography.

For almost a decade, our NHSTV station had been operating with essentially the same basic technology configuration. We had a fairly small control room with a couple of monitors, and all of our video sources fed off a single Broadcast Pix switcher. It was head and shoulders above most high school programs, of course, but as a former pro broadcaster myself, I knew we could do better. I had a vision for bringing this facility into the 21st century and upgrading the equipment to give our students a more realistic work environment; in other words, one that would prepare them to work in a real control room and a real TV studio. 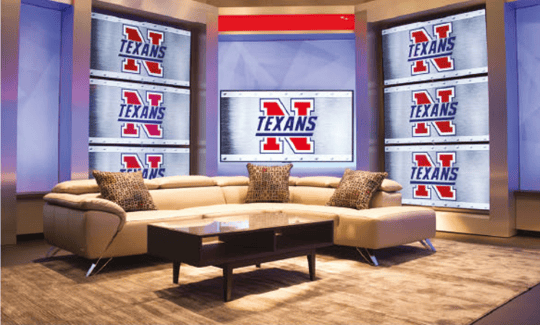 “.. tying it all together is a keyboard-video-mouse system from IHSE..”

The passage of a big school bond in our district in 2017 gave us the opportunity we needed to realize this vision. This year working with technology reseller Digital Resources, we were able to launch an all-new and thoroughly modern broadcast facility for NHSTV. We were going for a scaled-down version of a professional news studio, which meant installing pro-level equipment that would be similar, if not the same, to what our students will encounter in real-world careers.

With those goals in mind, we installed an all-Ross Video production environment including Ross routing switcher, playout server, graphics engine, and terminal gear. Our new routing control room is about four times the size of the original, with up to seven operator workstations a separate rack room. Tying it all together is a keyboard-mouse-video (KVM) system from IHSE, a set of switches that allows us to control multiple computers from one or more keyboards, video monitors, and mice. With KVM connectivity, we have the flexibility to manage all seven of those production computers from six different user locations in our studio. This brings new efficiencies to our production environment, because our studio producers are able to pop into the KVM system right from their own computers and make changes or perform tasks without having to get up and walk over to the dedicated workstation. Fewer people moving around in the control room isn’t just a time saver; it also makes things safer and less chaotic when we’re in the midst of a live production.

Hands-on learning with a hands-off instructor

As coordinator of the CPM program, I see my role as instructor and advisor for our student producers, but that also means helping them be extremely hands-on and removing myself, as much as possible, from the production. Of course, there are times when I need to step in and help, and that’s another area in which the IHSE KVM system is really invaluable.

If a situation arises with a server or other technical function, I don’t have to physically enter the studio to help with troubleshooting. Instead, right from my own desktop in my office, I can take instant control of any student’s workstation. In this way, the KVM system is able to help me ensure our broadcasts are 100% student-run, while still allowing me to provide unobtrusive guidance and support.

Preparing broadcasters of the future.

So how impressive is our new NHSTV studio? Here’s a story: our local NBC affiliate, KXAS, did a recent feature on NHSTV and invited our crew so their facility for the afternoon. It was so gratifying to see our students walk into the KXAS control room and not only recognize the Ross equipment but be able to sit down and operate it without much orientation. The KXAS engineers were in awe.

That’s when I realized we’ve realized our vision to create a facility that helps our students be work-ready when they graduate. We’re giving them tangible, real-world experience that will give them an advantage for internships, acceptance to college programs, and employment in any facility involved in audio and video production. And that’s not just television – it could include a house of worship, a corporation, or a production house. The sky’s the limit for our students!

Jeremy Rawe is coordinator for the Creative Media Production program of the Northwest Independent School District, based in Ft. Worth, Texas.

A few weeks back, I was showing a TouchDriveTM panel to some prospective customers online. One person, in...
Tedd Tramaloni, Business Development Manager for Production Switchers and Servers Sep 30, 2021

Chris Lennon admits that metadata isn’t the sexiest topic – but it’s one that can make a tremendous diffe...
Ross Video Team Aug 16, 2021