END_OF_DOCUMENT_TOKEN_TO_BE_REPLACED

The Ross Sports team are no strangers to delivering high-profile productions, and when it comes to the world of sports and entertainment, there is perhaps no bigger stage than the “Big Game” in American football. For the past four years, Van Wagner Sports and Entertainment have entrusted team Ross to support with the in-venue production on “Super Sunday”. From NRG Stadium in Houston, Texas; U.S. Bank Stadium in Minneapolis, Minnesota; Mercedes Benz Stadium in Atlanta, Georgia; and most recently to Hard Rock Stadium in Miami, Florida; the Ross Sports team has played an integral role in putting on one of the greatest shows in sports. As we prepare for this week’s championship game at Raymond James Stadium in Tampa Bay, Florida, we thought we would first look back on the past four title games to see how certain aspects of the in-venue production have evolved in recent years.

A two-time host of the “Big Game”, NRG Stadium in Houston, Texas most recently held football’s championship in February 2017. Home to the Houston Texans, the stadium opened in 2002 and was the first in the NFL with a retractable roof. On the venue technology side, the venue has undergone several upgrades over the years and when it was time to show off its capabilities for the “Big Game”, our XPression graphics platform was added to drive the main displays pixel-accurately. 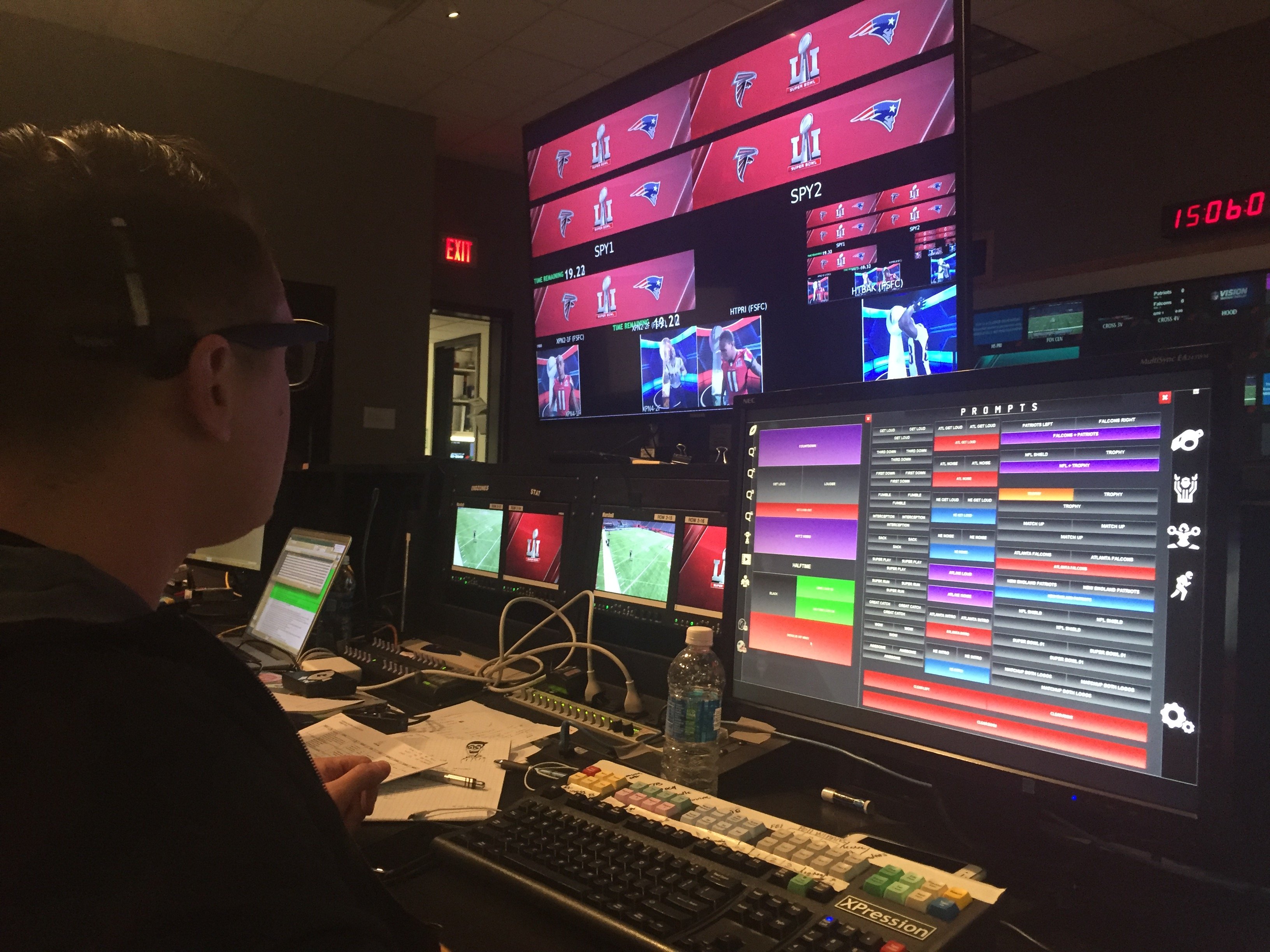 In addition to powering the displays, the Ross Sports team was on the ground for their first “Super Sunday” extravaganza as they fired off data-driven graphic templates and videoboard inserts throughout the show. These dynamic visuals were controlled with the press of a button through a custom DashBoard panel.

Opening its doors in July 2016, the marvelous U.S. Bank Stadium is located in downtown Minneapolis and is home to the Minnesota Vikings of the National Football League. In addition to regularly hosting National Football League (NFL) games, the multi-purpose facility has also welcomed the Summer X Games as well as a variety of major concerts and events.

On February 4, 2018, U.S. Bank Stadium hosted the NFL’s championship game, and with Ross technology featuring heavily throughout the venue, Van Wagner Sports and Entertainment naturally turned to our team to once again to help run the in-venue production. 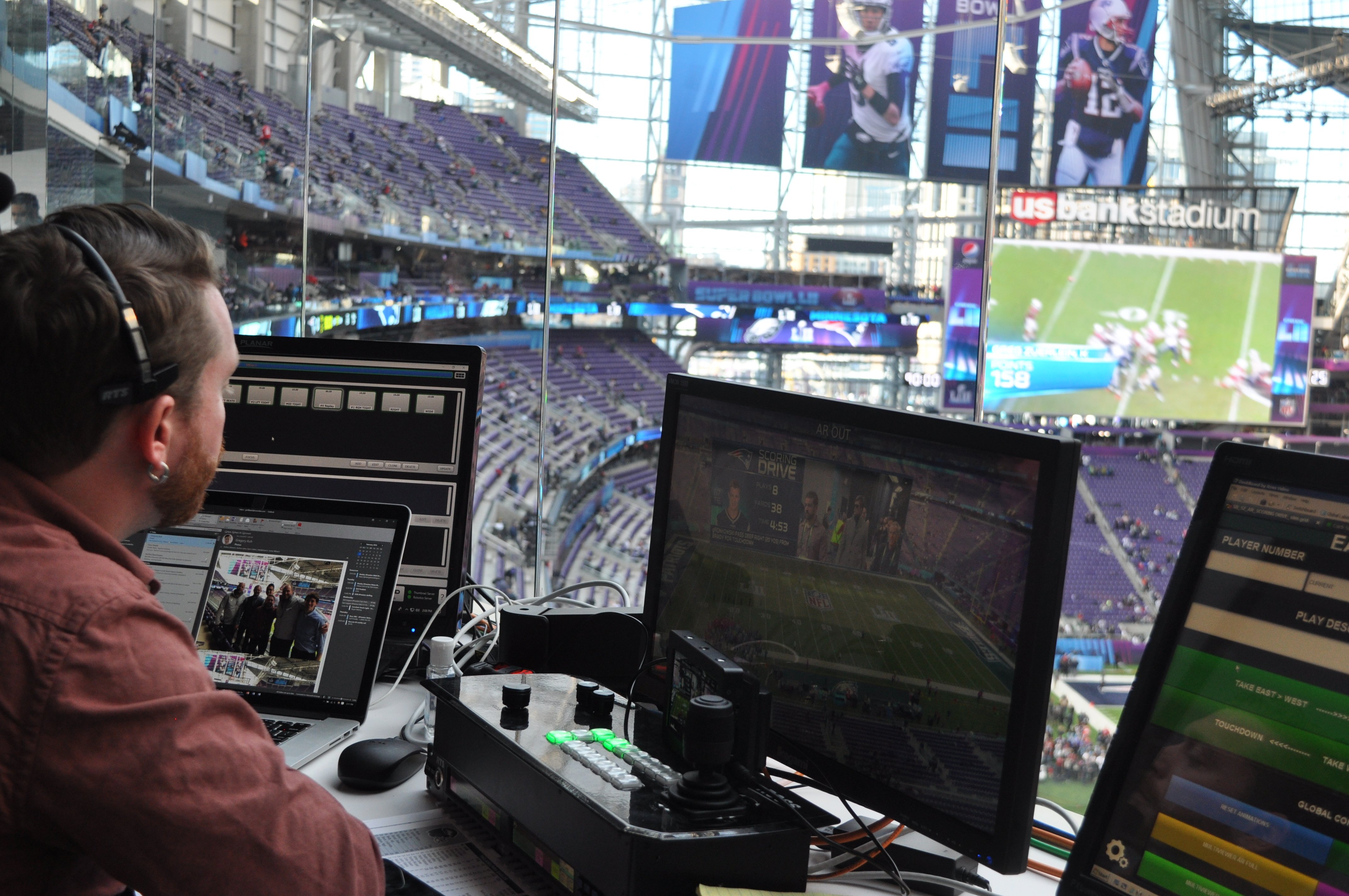 With graphics at the heart of the show and an ever-increasing emphasis on data and statistics in professional sports, the 52nd edition of the “Big Game” saw the combination of our XPression graphics platform with Datalinq to drive the NFL’s Next Gen Stats across a myriad of in-venue LED displays. The show also saw the introduction of augmented reality (AR), supported by our Voyager platform and powered by Epic Games’ Unreal Engine 4. Used to display scoring drive summaries, our Voyager AR platform has become a staple of the championship game ever since.

The opening of Mercedes Benz Stadium in January 2017 marked a giant leap forward in the world of stadium production as the revolutionary Halo LED display was introduced. Measuring at over 1,100’ wide and 58’ high with an astonishing 21,512 x 1,152 pixel resolution, the Halo display is fed by our XPression Tessera control system, a real-time 3D graphics render engine that can drive any sized LED display pixel-accurately. 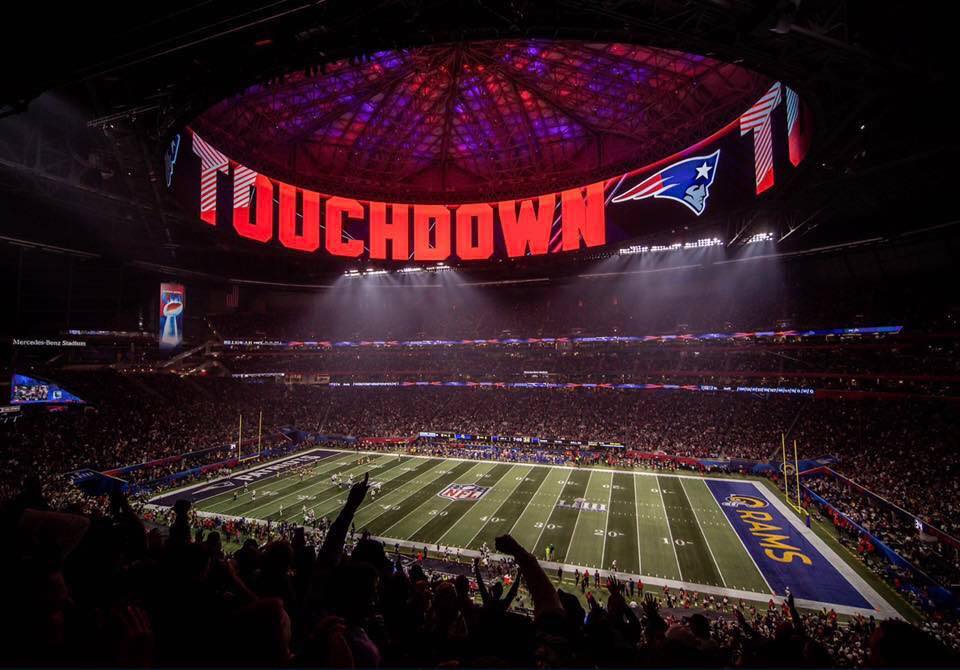 While all eyes were understandably on the Halo display, the power of our Unified Venue Control Solution is what helped tie the 2019 show together. The flexibility of our custom DashBoard control panels and ingenuity of RossTalk protocols synchronized the main display with many 3rd party products like the in-house IP TV, video routers, LED fascia digital media servers, and LED accents. This level of coordination truly elevated the event to new heights and provided fans with an immersive game-day experience.

Augmented reality was once again featured as part of the venue solution and our services team was on the ground to support with the delivery of virtual graphics across the variety of videoboard displays to draw fans deeper into the game.

The most recent iteration of professional football’s title game took place at Hard Rock Stadium in Miami, Florida. Building off the success of the previous three events, our team continued to add new solutions to the in-venue technology mix with the introduction of our PIERO sports analysis tool. PIERO was used to overlay tactical graphics on video content to create visually engaging and informative effects for the fans attending the game. 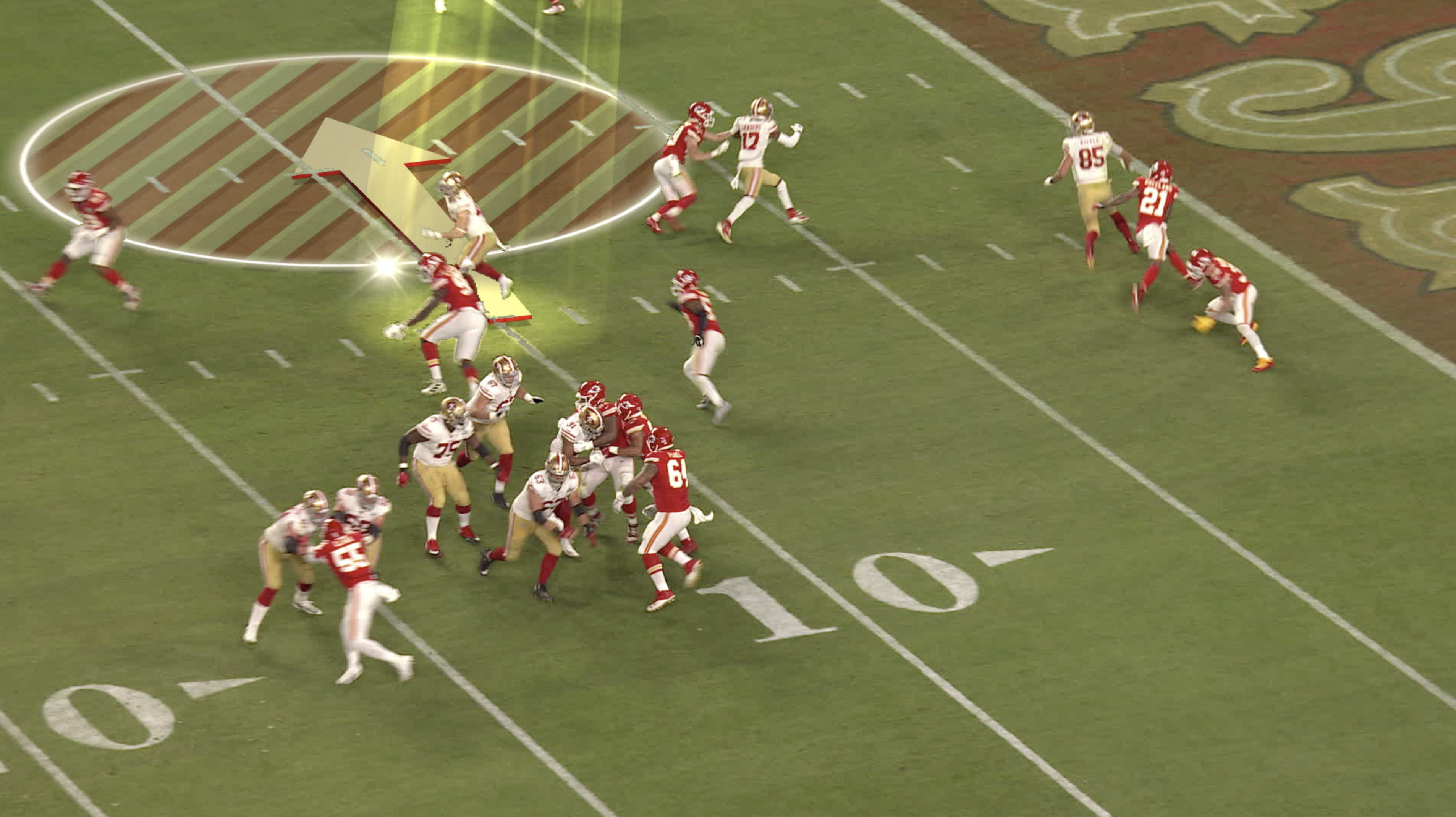 On the control room side, a pair of our Acuity panels drove the program feed, traditional CG (character generation) ran on XPression, and our XPression Tessera system powered the main videoboard displays.

While this year’s game may look a little different with limited capacity, the Ross Sports team will once again be on the ground to support Van Wagner Sports and Entertainment, the BucsVision production staff, and the league in driving new in-venue innovations for one of the biggest shows on earth.

As a long-time partner with Ross, Raymond James Stadium is already packed with Ross technology and the BucsVision game-day production staff will lean on the full power of our Unified Venue Control Solution to deliver another dazzling display. Be sure to follow our social media channels all week long for regular updates from Tampa Bay as the Ross Sports team prepares for yet another major event this coming Sunday. 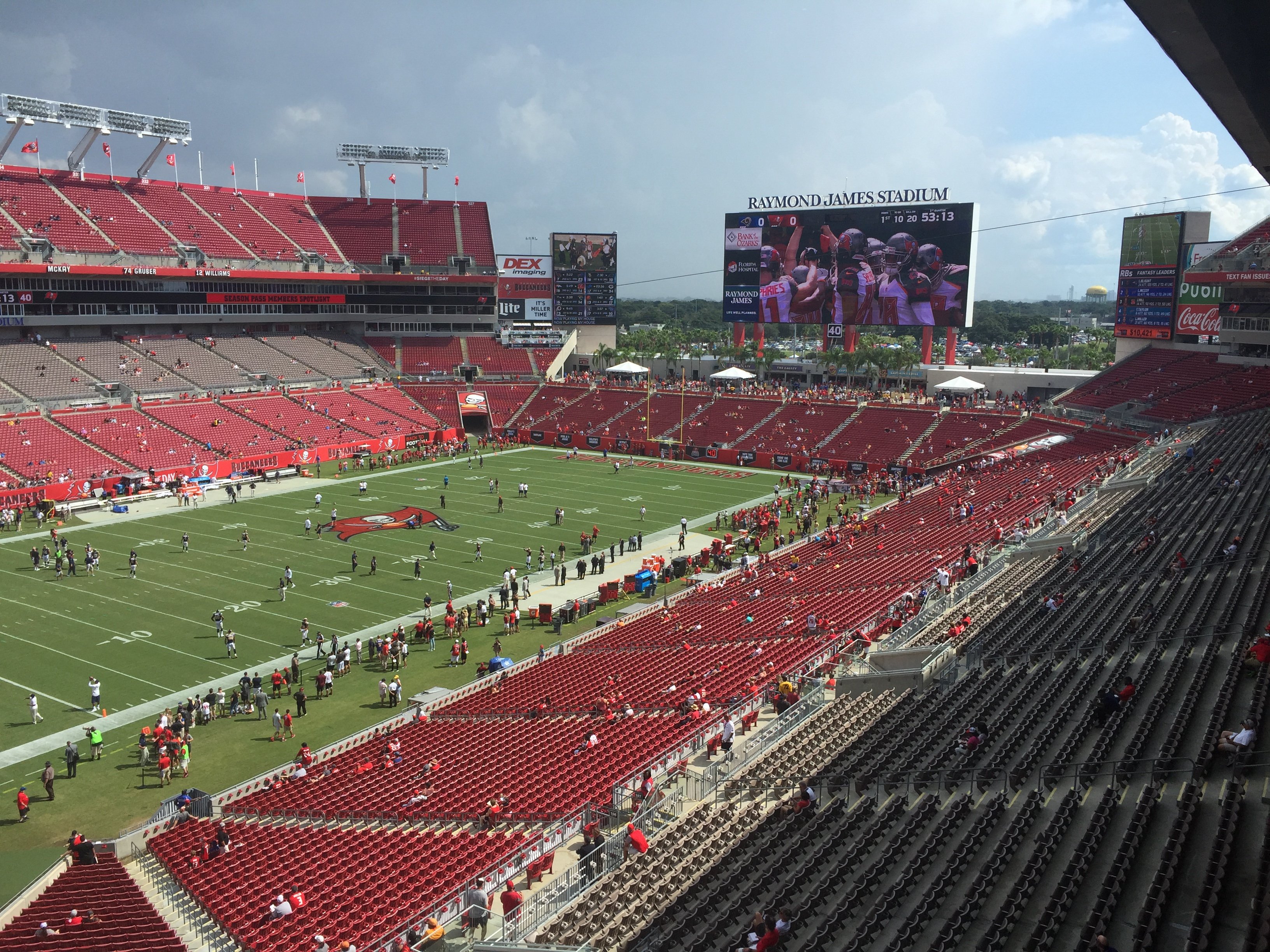 To learn more about our Sports Venue Solutions, visit https://www.rossvideo.com/applications/sports-live-events/.