END_OF_DOCUMENT_TOKEN_TO_BE_REPLACED

The Order of the Arrow, Scouting's National Honor Society, recently partnered with Ross Production Services to produce Momentum Launch. The COVID-19 pandemic forced the postponement of this summer's signature program, the National Order of the Arrow Conference (NOAC), which was to be held at Michigan State University. As a result, a group of youth leaders and adult volunteers created Momentum Launch which delivered similar programming in a virtual setting.

In addition to training sessions, the programming included panel discussions with youth and adult leaders as well as Scouts from across the country. The event also featured question and answer sessions with prominent Scouters, including Roger Mosby, the President and CEO of the Boy Scouts of America, former Secretary of Defense Dr. Robert Gates, and former Secretary of State Rex Tillerson. There was even a cooking competition and game show.

All of this was produced out of Ross Production Services' flagship mobile unit, RMP6, from the J.W. Marriott Leadership Center at the Summit Bechtel Reserve in West Virginia. "RMP6 provided us with the space necessary to maintain social distancing between our control room crew. The Ross Ultrix Router enabled multiple switcher set ups for breakout sessions and allowed us to control multiple transmission paths" said technical producer Mike Lano. 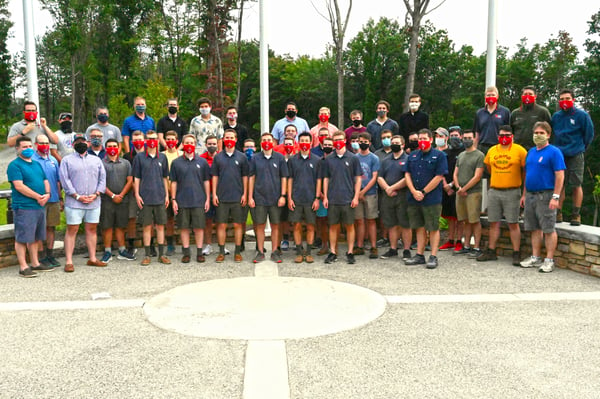 The integration between multiple Ross products allowed a skeleton production crew to do multiple jobs, such as switching a training session and running graphics simultaneously. The equipment's ease of use also allowed younger crew members to quickly train on and operate equipment, which is a major point of emphasis for the OA, where adults advise and youth take on key roles.

In addition to guidelines put in place by the Summit Bechtel Reserve, requiring temperature checks, masks, and social distancing, the production team also increased its audio complement to provide an individual wireless microphone and IFB for each person appearing on air. The equipment was assigned to that individual for the duration of the show and was sanitized multiple times per day. Additionally, each crew member was provided a headset for the run-of-show, and camera operators were socially distanced from each other and on-air talent.

Also in wide use was the Ross Virtual Cloud Solution. With only a small staff on location to produce the event, a solution was needed to connect with trainers, guest speakers, and Scouts from across the country. The cloud's simple interface made it easy for presenters to connect with the team on site and required minimal assistance from the engineering team. "We wanted a solution that was easy to use and required minimal configuration on both the user and the truck ends. This was it" said Lano.

"This is the fourth Scouting event where I've worked with the team at RPS" said Lano. "Their technical expertise and commitment to going above and beyond to serve their clients have greatly helped us deliver best in class programming in each case."