END_OF_DOCUMENT_TOKEN_TO_BE_REPLACED

The newsroom computer system (NRCS) was originally designed as a rundown and scripting tool for news broadcasters. But many of the same needs for planning, organization and communication are needed across a wide range of broadcast verticals. Production teams focused around sports and live entertainment are in need of collaboration and content creation tools tailored to broadcast workflows.

Nordic Entertainment Group (NENT) is the Nordic region’s leading entertainment provider. Their content includes live sports, movies, show series, music and their own original shows. NENT Producer, Tobias Wold discusses how NENT are implementing Inception.cloud in the production of their live sports broadcasts and how it has improved their workflow.

The Main Criteria for a New Rundown Tool

NENT had previously used a web-based rundown and scripting tool but had found the functionality too limited. Simple workflows such as copy-pasting stories, drag and dropping stories, re-ordering stories and timing were non-existent, which necessitated the need for a more professional rundown system.

NENT Producer Tobias Wold had previous experience with Inception at another broadcast facility and knew the features would be a major improvement and align more closely with their workflow needs. However, he had previously used a version of Inception that was installed locally in the facility where it was being used on physical hardware. NENT works across a variety of permanent and rented spaces, as well as traveling to cover sporting and live events. A web-based system was required to keep everyone connected and working together regardless of location. The feature set of an on-premise and cloud-based version of Inception are the same, so Inception.cloud became the preferred option.

Another requirement centered around the types of end users. While they wanted an increased level of functionality, numerous freelancers would also be using the system during production, enhancing the need for minimal training and ease of use. 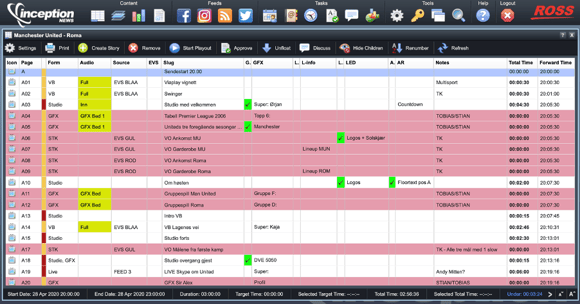 Today, NENT uses Inception for all its sport programming as well as live shows, recorded shows and even podcasts. They now have a more robust and dynamic structure they can customize themselves, which centralizes content creation and even planning.

The editorial and production teams were able to see immediate workflow improvements, including: 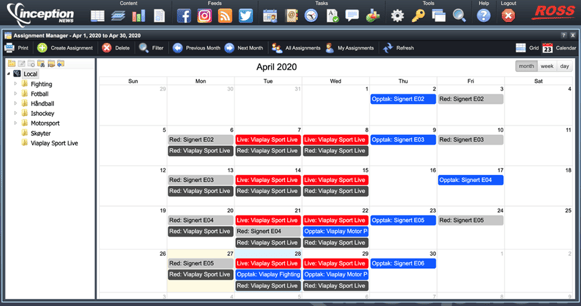 While capabilities around building and executing a show rundown were the primary motivation for the move to Inception, NENT is now looking to grow their workflow using other Inception features.

Using the Assignment Manager feature allows them to better organize upcoming content and inform staff of coverage plans ahead of building the show rundown. The calendar-like feature is designed specifically with broadcast planning in mind. Specifically, at NENT, the entire production team can view what editors are booked, which editing suits are taken and what the status is of the subject they are working on.

Inception also includes integration with social media and web CMS platforms. While NENT is not currently using the publishing functionality, they have already integrated social media searching from Inception into their workflow. The editorial team searches for content on Twitter and Instagram in Inception and builds playlists of social posts that are automatically pushed to their motion graphics system. This simplifies that process to get photos and videos from social media to the screen during a broadcast.

Advantages of Software as a Service (SaaS)

Not only is NENT’s Inception instance running in the cloud, it is being run and managed by Ross as a service. Ross is using Amazon Web Services (AWS) for hosting. Ross staff install, monitor and maintain the software and necessary AWS infrastructure. This means NENT does not need to worry about physical rack space or regular maintenance activities like upgrades.

While an on-premise installation may be required for some applications, a cloud hosted version of Inception means that NENT doesn’t need a VPN service. Previously, Tobias had to organize and setup freelancers with a VPN account, manage troubleshooting and support when issues would come up. They’ve also eliminated the extra cost of a VPN provider.

Another major advantage of a subscription option for Inception is the ability to scale the number of user licenses as needed. In sports production, staffing needs can vary with licensing rights, seasonal changes and occasional special events. NENT has the option to grow the system both based on the features and number of users as their coverage needs fluctuate in the future.