END_OF_DOCUMENT_TOKEN_TO_BE_REPLACED

Professional sports teams are constantly looking for new ways to push the boundaries of their game-day presentation with the goals of drawing in new spectators while finding innovative ways to delight loyal fans. With these goals front and center for in-venue production teams, we’ve seen the introduction of larger LED displays with ever-increasing pixel counts throughout venues around the world – Mercedes Benz Stadium and SoFi Stadium immediately come to mind. Moving beyond these impressive displays, there is one canvas within the sports venue presentation world that has untapped potential – the playing surface.

While sports teams have experimented with display projections on the playing surface for quite some time, professional hockey teams have recently used Ross Video Technology to seamlessly integrate on-ice display projections into their entire production workflow, which has elevated their pre-game ceremonies and entertainment between periods to a whole new level.

Predators and Jets making full use of ice-display projection systems

One team that has been a pioneer in integrating on-ice projections into their in-venue show has been the NHL’s Nashville Predators. Driven by XPression Tessera, the ice projection system at Bridgestone Arena is tied into the Ross Unified Venue Control solution, resulting in on-ice visuals being linked directly to content on the LED displays as well as to the lighting and audio system. This allows the team at Bridgestone to generate in-sync, show-stopping moments with their ice-display projection system. 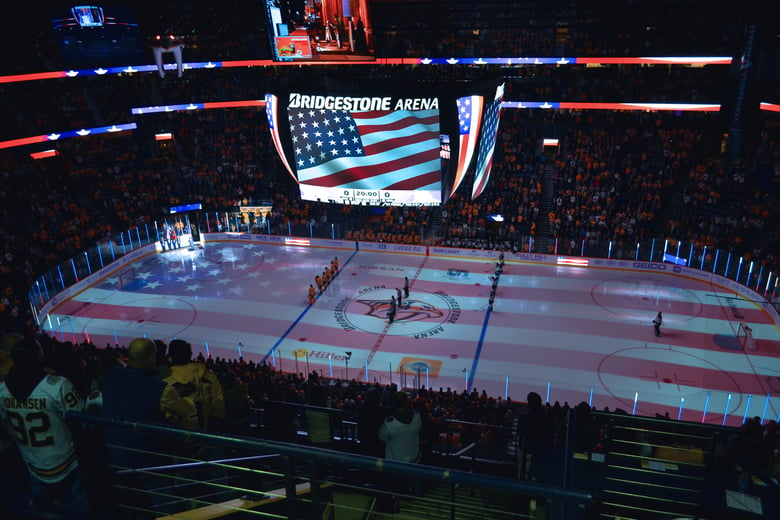 The Nashville Predators have leaned on the Ross Unified Venue Control Solution to create moments of exclusivity where all content across the LED displays, LED stanchions and ice-display projection system are in sync.

If Synchronizing content between ice projection and LED displays is half of the equation to unleashing the potential of the in-venue projection systems, the other half is finding innovative ways to integrate real-time data. Most recently, the Winnipeg Jets installed an on-ice projection system at the Canada Life Centre to raise the bar on an already amazing Jets game experience. With 8 projectors at the venue covering 4 sections of the ice surface, the creative possibilities of this new system are endless.

Specifically, through the power of XPression Tessera, the crew at True North Sports & Entertainment will not only be able to display high-resolution videos, logos, player headshots, and sponsored content on the ice, they will also be able to engage with fans on a deeper level by displaying in-game stats and analytics during the intermission. “Jets fans are some of the most passionate in the entire league, and as a hockey first fanbase, they are also some of the most educated when it comes to keeping up to date with player stats and trends. Being able to display real-time game stats on the ice allows us to connect with our fans like never before. It’s extremely cool but also informative. It also allows us to run other content on the video board and LEDs while still giving the hockey fans the stats they desire” explains Kyle Balharry, Senior Director of Game Production with True North Sports + Entertainment.

With only a few games under their belt with the new system and with the guidance and expertise of our Sports & Live Events team, we’d say that the Jets are off to a flying start with their new ice-projection system.

For more information about the Unified Venue Control Solution from Ross, visit our Sports Venue page.